IN THE FOOTSTEPS OF THE LION by Larry Buttrose 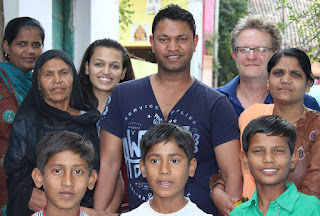 
I was sitting in my home office in the Blue Mountains on a typically chilly midwinter day when for some reason I checked an old email account I rarely used and found an email from someone at Penguin Books. When I opened it I saw it was from the publisher, Ben Ball, asking about my interest in ghost-writing a book about a lost Indian boy.

I rang him and instantly knew this was a remarkable true life saga: a young boy gets lost on a train in the west of India, and ends up thousands of kilometres away in the chaos of Howrah Station in Calcutta (now Kolkata). On the streets near the station he survives for weeks, if not months, as a street kid, before being turned in to the police and then plucked by fate in the form of a kind-hearted adoption agent, and a few months later is living with his new family in Hobart. There he has a typically Aussie childhood, and then a quarter of a century later, after years of searching using Google Earth by following rail lines away from Kolkata, locates his original home town. He flies to India and miraculously manages to meet his family who still live in his old home town. The family is overjoyed to see their lost son again. The circle closes.
Before long I was sitting in the Penguin’s Sydney office in Surry Hills where Ben introduced me to Saroo and his then manager, Andrew Fraser. Saroo was a sizeable man with a direct, no-nonsense manner. Andrew exuded experience and professionalism, yet at the same time was relaxed and easygoing. They both seemed open and down to earth, and we eased into the meeting. I told them how much I loved the story and what a terrific book it would make, but also spoke about how much I loved India, having travelled there on a number of occasions, and had included it in two travel books. I had even set a novel in Pondicherry (now Puduchery), written while staying in the legendary Sea Side Guest House on the esplanade looking out onto the Bay of Bengal.
The three of us seemed to get on, and I returned home hopeful of getting the job. I didn’t know how many others were interviewed, but I imagined it would be a few - it was a very good project. When I didn’t hear anything for around a week, I thought it might have gone to someone else, but wrote Ben an email to check, and he later got back apologising that he’d been off work due to illness, and that if I still wanted the job I could have it. I confirmed that I did indeed want it. The deadline was very tight though: they needed the book researched in Tasmania and India, and a manuscript of 80 thousand words, completed by early December, for planned release for Mothers Day the following year. By the time the contract was finalised, that was just three months to research and write the book.  It would clearly be a challenge, especially as I was also working as a sessional university teacher and contracted until November, but I quickly scheduled in two trips to Hobart to interview Saroo and his Australian family, working around my university commitments.

I had never been to Tasmania before, and the airliner flew in through low banks of purple black clouds, over a slate-toned sea and a jagged coastline that looked a bit like Ireland. I checked in to my hotel near the Hobart docks, called home to my partner Belle and our then three year old, Ada, and settled in. The following day I recorded the first of many hours of interviews with Saroo.
There had been a lot of coverage of the story already, from the BBC and major American magazines, to The Age and ABC local radio in Hobart. The media interest had begun soon after Saroo found his mother, brother and sister in Khandwa, the small regional centre in Madhya Pradesh in the central west of India that was his birthplace. Neighbours had initially joined in the celebration, but word soon spread through the working class suburb of Ganesh Talai where they lived, and then through the entire town, and before long people were thronging in to see him, the small boy who had vanished so long ago and come home as a grown man, from halfway around the world.  The next day the local media was onto the story, and word spread much farther afield, with crews flying in to cover the story and take it to all corners of India. That was when the international media got hold of it, and, ultimately, Penguin gained the rights for a book. It had all happened in the space of just a few months.
‘I was pretty amazed,’ Saroo told me, at our first recording session. He speaks with the laconic, matter-of-fact delivery of many Australians. ‘It was obviously a big thing for me personally, but I never could have imagined it would be of such interest to so many others. Sometimes I just had to go back to my hotel room in Khandwa to get away from it, it was so intense.’
Now he was sitting in another hotel room in Hobart, and telling the story again, only this time it would be the account of his entire life, where he had grown up in Khandwa, and how he had become lost on that fateful night, the train journey across India, survival on the streets of Calcutta, and everything that followed. 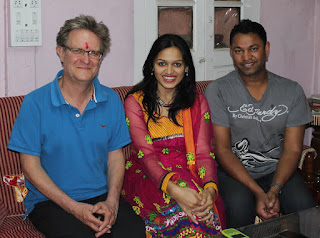 photograph Larry Buttrose
Me with Swarnima and Saroo at Diwali ceremony

With Swarnima’s help I was able to fill in aspects of the story from his family’s point of view, including his mother’s unshakeable faith that one day Saroo would return, as he ultimately did. She said she used to face to the south, and pray for his return. As it turned out, she had been facing in the right direction, even if he was farther south than she might have ever imagined.
The days passed quickly in Khandwa. We visited the town centre, where Saroo pointed out landmarks such as the old cinema, and the nearby lake, and other crucial landmarks he had identified on Google Earth. We also met with Rochak Nagori, the young man who ran Khandwa My Home Town, the Facebook group Saroo had contacted for vital confirmation of facts, and who had helped cement the conviction that he was right that he had finally found his home town after years of fruitless searching online.
A major part of our journey was to be crossing India by train, following as well as we could the route that the young Saroo might have taken. Saroo had not done this on his first trip back, but I considered it crucial for him to re-live it to see if any memories came back, as well of course as perhaps recalling more things that happened to him in Calcutta, once we reached our destination. There was only one direct service between Khandwa and Calcutta, the daily train service from Mumbai. For authenticity, we needed to catch it from Burhanpur, the next town along the line, where the young Saroo had ventured onto a train in the middle of the night, and couldn’t get off it until it stopped in Calcutta.  After we said our goodbyes to his family, a small crowd gathered in the nearby dusty town square of Ganesh Talai, where the locals again farewelled the man who had returned. As we headed off, small boys around the same age as the young Saroo had been ran alongside the car, laughing and shouting out their goodbyes. 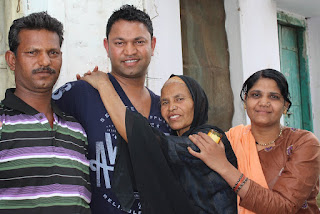 Posted by Larry Buttrose at 3:11 PM