THE ENDURING MYSTERY OF BOGLE AND CHANDLER 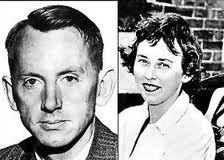 Doctor Gilbert Bogle and Mrs Margaret Chandler died in circumstances which have remained the topic of speculation and public fascination in Australia for more than four decades. The pair died in an apparent lovers’ tryst on a river bank in Sydney early on New Year’s Day 1963.
The New Zealand-born Bogle was a scientist of international repute, a physicist working on lasers for the government research body, the CSIRO. He was a popular figure in scientific and intellectual circles in Sydney at the time. Not only was he highly successful in his work - he was about to take his wife and family to the United States, where he would be working at the prestigious Bell Telephone Laboratories - he exuded charisma, played the jazz clarinet, and had a reputation as a ladies man.
Margaret Chandler was the young wife of a CSIRO technician, Geoffrey Chandler. She met Bogle at a Christmas party in late December, and he ensured she and her husband were invited to a friends’ home for New Year’s Eve. Bogle offered Mrs Chandler a lift home, and they left the party together as dawn approached. They stopped off at a lovers haunt a few kilometres away, on the bank of the Lane Cove River, but little is known about what happened next.
Their bodies were discovered a few hours later by two boys looking for lost golf balls from the adjoining course, and police rushed to the scene. Almost immediately the police and press realised they were dealing with something major, and very out of the ordinary. Not only was Bogle a well known figure in the more rarified echelons of Sydney society, but he had been found with a married woman, both of them in a state of partial undress suggesting sexual activity. Moreover, no obvious cause of the deaths could be found. They was no sign of any gunshot or stabbing: the bodies were virtually unmarked. Sydney and the entire nation were scandalised by the revelations. The inquest created enormous attention (and newspaper sales), yet at its conclusion the coroner was forced to bring in an open finding. A cast-iron alibi for Mrs Chandler’s husband - the prime suspect - removed him from  suspicion, and exhaustive testing failed to detect any toxic substances in either body. There the case rested, over time attaining the status of a mystery.
What did come out during the decades after was that Bogle was doing work which might well have brought him to the attention of various spying agencies such as the CIA or the KGB. The laser he was working on developmentally in 1962 was in use in smart bombs in Vietnam by the end of the decade. There is also the possibility that Bogle was conducting his own inquiries into the death of his friend Cliff Dalton, head of the Australian Atomic Energy Commission, whose wife Catherine maintained he had been killed “without hardware”.
There were suggestions too that Bogle might have been involved in the development of laser anti-satellite weaponry, although a veteran reporter, perhaps tellingly for the yellow press of the era, recently claimed that was concocted by newshounds keen to keep the story going. Whatever the case, there remains the suspicion in many quarters that there is more to the story than Sixties free love gone wrong, and that Doctor Bogle and Mrs Chandler may have been victims of Cold War intrigue. There is also an explanation, aired in a 2006 TV documentary, that the pair died from noxious hydrogen sulphide gas exuded by the river, but for some this raised as many questions as it answered. After all, if such lethal gas leaks were occurring from the river bed, why were Bogle and Chandler the only two ever known to be affected, in an area known as a lovers' lane? The case would seem yet to be closed.
From my book Dead Famous: Deaths of the Famous and Famous Deaths.
http://www.amazon.com/Dead-Famous-Deaths-Famus/dp/1741105641/ref=sr_1_15?ie=UTF8&s=books&qid=1277516386&sr=8-15
Posted by Larry Buttrose at 4:54 PM